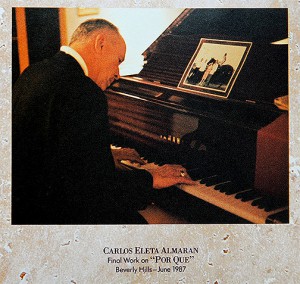 Carlos Eleta Almaran, was born in Panama and is recognized as the composer of the song “Historia De Un Amor” a worldwide famous song, that became a great success songed by many celebrity mixed singers from all genres such as Lucio Gatica, Julio Iglesias, Roberto Alagna, Dalida.

Carlos Eleta Almaran was also the founder together with his brother Fernando of the first Television channel of Panamá, RPC Televisión, Canal 4 and the pioneer of the radio.

Carlos Eleta Almaran‘s dedication for Vanina Aronica  on her album «The Sound of Time».

In an autumn night of 1986, a young woman with a serene and elegant port, with a fascinating look and radiant smile made her entry on stage near the piano, without preliminary presentation, in the city of Panama.

My guests just like the bosses and the employees of the restaurant were converted in a susceptible public, hypnotized immediately by her presence…. he wore a delicious autochthonous “pollera”, her hair brown with red tones fell like waterfall on the back and her face was surrounded by delicate white flowers.

Vanina began to sing Granada, followed by Carmen and Mama. I realized that several years of professional practice and loving commitment had to precede this moment. hereas her voice with its delicious natural notes was runing up and down on the musical scale, her presence invaded the lounge until filling it completely.

I felt invaded by emotion, as enchanted.
The singing of Vanina made my own heart sing. Her qualities, her passion her own essence of her being palpitaded in every note.

There was a singer with all the delight of the modern woman but with the shine beyond the common, which reminds to me very well, the artistic qualities of old times.

Having listened to her performance of Story of a Love, I knew immediately that Vanina possessed the sensibility and the vocal qualities to first inaugurate “Por Que“.

The songs that Vanina has chosen to accompany “Por Que” in this album, expresses exactly her personal feelings and the point of view that she has on music.

Yes, Vanina enchants me ! And you, she will also enchant you !!